You are here: Home > Harold Francis Consultant Obstetrician and Gynaecologist
On June 8, 2011 in Old News & Events

Many of you will remember Harold and his wife Winifred from your midwifery or obstetric days at Oxford Street. Wini Francis died in 2007. Mr Francis was a New Zealander who came to England in the 1950`s. He and Winifred often worked as a team, pioneering new fertility techniques. He was a Senior Lecturer at Liverpool University`s Medical School and a conservative councillor for Aigburth ward. He was included in a list of 800 people (drawn up in 2007 to celebrate the city`s 800th birthday) who had the biggest impact on Merseyside.

One of our members remembers that, following his retirement, Mr Francis did some locum work in day surgery at the Royal Liverpool University Hospital and recalls how he kept the theatre staff entertained with his stories.

To read the full article in the Daily Post  visit www.liverpooldailypost.co.uk  and search – Harold Francis 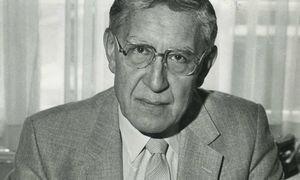